Well, I agree that it has been quite some time that I have removed an object from a young child’s nose.

I was going to post a little story about my 68-year-old female patient who could not, for the life of her, figure out how she kept getting ear infections (otitis externa, A.K.A. swimmer’s ear)! 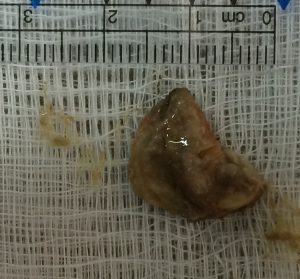 I gently told her to STOP CLEANING YOUR EARS WITH BOBBY PINS FOR GOSH SAKES!  I think that she understood me, but initially, she protested a little – exclaiming that she had always used bobby pins in her ears.

On to the purpose of today’s blog post to you:  a cute little 3-year-old girl comes in with her Mom because for 2 months she has had a terrible odor seeming to come from her nose.  She also had some yucky drainage from the right side of her nose along with occasional nosebleeds.

Yes, she was given antibiotics from her well-meaning pediatrician, but to no avail.  So I took a gander in her nose…left side was clear, but the right side had this gross looking object in it.  I removed it from this little trooper’s nose and she was really a trooper.  She didn’t put up the typical 3-year-old fight and let me remove the object.  She won’t need any more antibiotics, will be just fine and just needs to read a little book so that this doesn’t happen again!