Are Q-tips the “Gateway Drug” to placing foreign bodies in the ear?

Apparently, the first physician that he saw for the left ear foreign body tried to remove it by putting a dab of Super Glue on a stick and allowing the stick to adhere to the foreign body… it didn’t work. 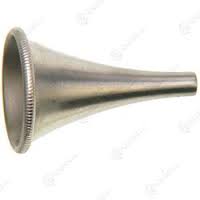 It did, though, make for a really anxious boy. When he came to my office, he was noticeably upset and slightly unwilling to undergo another attempt at removal. After some light-hearted banter, he let me recline the chair, turn on the microscope and put a funnel-shaped instrument (called a speculum) into his ear.  After the speculum was in (with only a tiny bit of wincing), I saw a brownish-gray foreign body. It was hard, so it couldn’t be grasped.

So, I used a right-angled hook to get behind the object and gently pull it out. It was not the most comfortable thing that he has endured, but he handled it like a champ. After that pebble was removed, I saw a second one and removed it the same way as the first. Finally, I peered down the long corridor (ear canal) and saw something else… A THIRD PEBBLE RIGHT NEXT TO THE EARDRUM! 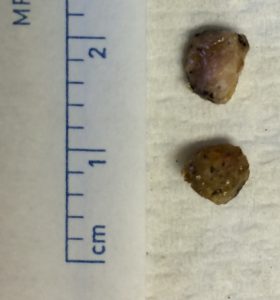 As gentle as I tried, the brave child had a really hard time tolerating the removal of the last object. I stopped and left it in the ear canal because if he moved while I was trying to remove it, his eardrum – or even worse the little bones of hearing on the other side of the eardrum, could be injured. So I prescribed some antibiotic ear drops and will see him next week. Hopefully, the ear canal’s gentle grip on the third rock will loosen…

My thoughts about Q-tips being the Gateway drug are these: Since so many parents try to “clean” their kid’s ears with Q-tips, kids will progress on to the harder “drugs” (foreign bodies) since they have been shown that one foreign body (the Q-tip) is “safe” to put into the ear; WHICH IT IS NOT!