Today I wanted to show all of you 3 fruits from our 2-year-old tree, called a Buddha Hand Citron.

These fascinating looking and uber-fragrant citrus grow on a tree similar to other lemon trees. 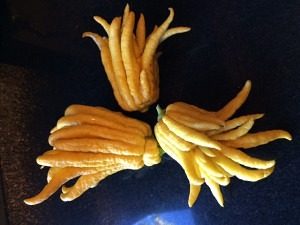 The difference is that the segments are already opened and each segment or “finger” is covered with the skin or exocarp as it is called. There is very little pulp inside the fruit, so they can be used for candy making, to zest onto food or in drinks, or simply just to look at.  Aren’t they cool looking?  You should smell them!

Speaking of 2-year-olds, this time of the year many kids will be doing craft projects. With that, particularly with the young kids, parents and grandparents have to be vigilant about watching them as they use craft-items.  Beads are a big problem, but small buttons, cotton, paper, and playdough can find their way into kids ears and noses. Besides watching them as they play and create, don’t forget to get down on your knees – at the kid’s eye level– and see dangerous items that they see, but you may have missed. 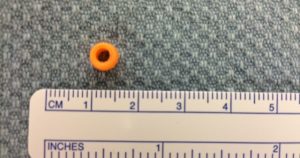 Kids of all ages can put items in ears and noses. Take a look at the bead here. This is from a 10-year-old’s left ear. It could not be removed by the doctor in the Emergency room or by the pediatrician. I also couldn’t remove it in my office either, while the child moved around. It was too painful. So he had to be taken to the operating room, given general anesthesia and then I could remove the bead. But wait… there’s more! The bead that is shown to the left is the second bead; there were 2 beads in this kid’s ear. The first one was a silver bead and because it had been in there for several days, the ear canal swelled around in, so it wasn’t possible to get it out while the child was awake. (I lost the silver bead before I could take the picture because it fell down the drain when I cleaned it in the sink). The frosting on the cake is that this 10-year-old boy also put a bead into his 5-year-old sister’s ear! The pediatrician retrieved that one. 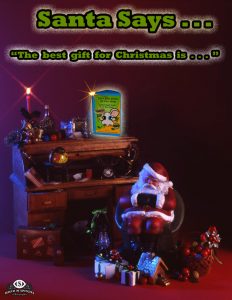 During this holiday season, just remember to watch the kids as they play and particularly when they are working with craft projects. Now is not the time to visit your doctor if a wayward bead or something makes its way into your child’s ear or nose.

Have a Happy Holiday Season!