Kids are Great Listeners, Aren’t They?

I visited my son’s school today on his day off, so he came with me to read to his class and the other “3’s” class.

When I got to the room, the kids were outside, so the teachers invited both classes in and they sat nicely in front of me. They were very attentive and seemed to soak up the book – all 22 pages of it.

During the time or after each page was read, there was some commentary from one or more of the kids, like “Cars don’t go up your nose!” or “Bread goes in my mouth, not in my ear!”. It really was more interactive than I thought it would be. And the interjections were perfectly acceptable and not disruptive. It is obvious that you have reached your audience effectively when they interact with the speaker.

You might know that 2-6-year-olds tend to put foreign objects in their ears and nose more than other ages, so the 3’s were a perfect audience for my book’s message – Don’t Stick Sticks Up Your Nose! Don’t Stuff Stuff In Your Ears! I am sure that the majority of the kids will avoid putting objects where they don’t belong. 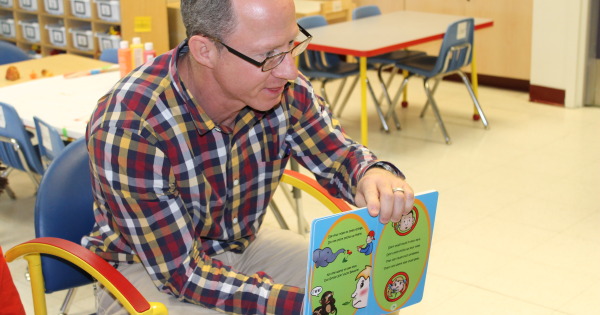