Been to a GREAT booksigning, recently?

My post today was going to be all about my upcoming book talk and signing.  It will be on August 16, 2014, at the new Phoenix location of the famed #Changing Hands Bookstore.  I was going to go on and on about book signings: what they are, why they exist and why bookstores and authors like to have them.  I didn’t know that I would see a perfect example of why ONLY YOUR ELBOW GOES IN YOUR EAR!  As I am coming to realize, Don’t Stick Sticks Up Your Nose! Don’t Stuff Stuff In Your Ears! is not just for kids.  My 40-something-year-old patient should read it too!

In fact, I gave his wife one of my book marks so she’d remember to pick up a copy and read it to him.

As funny as an ear foreign body sounds, it can be very detrimental. Here is how it happened. My patient had just started using a #Qtip in his ear when his wife came into the room. (He thought that she was outside at the time and she startled him.) His hand jerked and the Qtip proceeded to puncture his eardrum at about the 2 o’clock position.  He now has hearing loss.  Luckily for him though, he didn’t injure one of the little ear bones, so when the ear drum heals, his hearing should come back to normal. He and his wife didn’t know that Qtips weren’t for cleaning the ear canals. (Fact of the day:  The three little bones are called the malleus, incus and stapes)

In fact, many patients ask me, “What are Qtips made for, if they aren’t made to clean out the ear canals? My answer is usually, “I don’t know, I didn’t invent them and I don’t market them”.  But, I searched a little and now I know that the anwer to that question can be found on Pinterest and on various craft websites.  There are probably a thousand things to do with cotton tip applicators that do not include the ears (or nose for that matter).

In summary, Don’t Stick Sticks Up Your Nose! Don’t Stuff Stuff In Your Ears! is a great book to read to a child and a great book for adults to read to remind themselves… 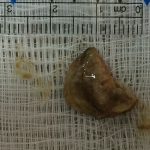