Don’t Stick Sticks Up Your Nose! and Costco

Dr. Judith Briles has said, time and time again that marketing-promoting-selling your book is a marathon and not a sprint.

How true the good doctor and book guru is. Most of my posts have been about specific foreign objects that I have taken out.

I post these to provide helpful hints and real-life examples of ear and nose foreign bodies so that people realize how common this issue is. It also gives information regarding which are the most common things that find their way into kid’s ears and nose, so that adults can be vigilant about protecting their kids from putting objects where they shouldn’t go.

For your enjoyment, here is a video of a physician demonstrating a nasal foreign body and discussing its removal.

Well, getting back to the book and the long race I have been running: We are making some headway, turning some heads, and making people aware of the common problem of nasal and ear foreign bodies. For the most part, it can be funny, sometimes scary, frequently costly to remove and sometimes very dangerous. When kids have the book read to them (or read it themselves), the greater chance we have to avoid the problem altogether.

Speaking of reading the book, wanna hear something funny? The book has been rejected by 2 large #craft stores. In one of the cases, I was told that if the book was sold there, the stores may not sell so many beads. Beads, by the way, are one of the most common ear and nose foreign body. I firmly disagree that it would reduce sales. It would not affect sales in the least but promotes that stores’ commitment to responsible product sales. Don’t Stick Sticks Up Your Nose! Don’t Stuff Stuff In Your Ears! allows for parents to have a discussion with their kids about ear and nose foreign bodies in a fun and light-hearted way, allowing them to teach their kids that it is not a good idea to have an object find its way into their ears or noses. 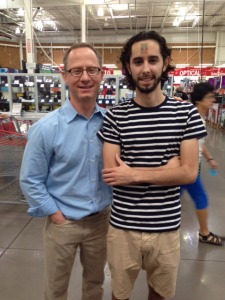 Finally, Costco was SO NICE to allow me to hold a book signing at their Paradise Valley, Arizona location and I had so much fun. There were a few book sales, a few stories told to me by parents and grandparents-about their kids/grandkids foreign body escapades and a lot of fun! The store manager and staff couldn’t have been nicer and I hope to be back there with another book signing (if they will have me!).

Oh, here is me (on the left) with an enthusiastic fan.

Look closely at his forehead… he put our temporary tattoo prominently in the center of his brow!!! Our first moving billboard! Thanks, Robert.