Includes references for Jewish children that correspond with the ancient blessing, Asher Yatzar” 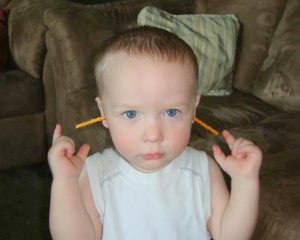 After 20 years in practice, award-winning author, Phoenix Top Doc and noted otolaryngologist, Dr. Jerald Altman, is never amazed by what he has to remove from the noses and ears of his child patients—rocks, beads, candy, nuts, buttons and more!

Kids are curious and trial and error are a large part of their development. Unfortunately, this can lead to unintended consequences that are dangerous for children, and troublesome and expensive for parents.

In 2013, Dr. Altman, a recognized ear, nose and throat specialist, published his two-time award-winning book, Don’t Stick Sticks Up Your Nose! Don’t Stuff Stuff In Your Ears! to teach kids about the hazards of inserting objects in the ears and nose. 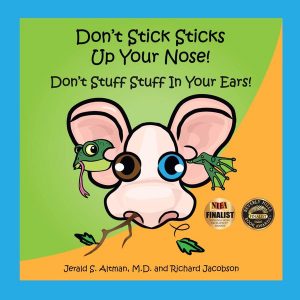 Today, Dr. Altman is pleased to announce the release of an updated edition of, Don’t Stick Sticks Up Your Nose! Don’t Stuff Stuff In Your Ears!, which includes cultural references for Jewish children that correspond with the ancient blessing, Asher Yatzar. (ZonaBooks, LLC, Available at DontStickDontStuff.com and Amazon)

“Through colorful illustrations and clever rhyming schemes, Don’t Stick Sticks Up Your Nose! Don’t Stuff Stuff In Your Ears! provides a fun and engaging way to teach kids not to put dangerous objects where they don’t belong,” says Dr. Altman. 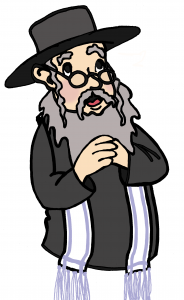 He adds, “By including cultural references specific to Jewish children in this new edition, we’ve further widened our audience so we can help an even greater number of kids, along with their parents.”

Don’t Stick Sticks Up Your Nose! Don’t Stuff Stuff In Your Ears! is a colorful and playful 33-page board book. Through memorable rhymes and repetition, children learn in a fun and enjoyable way that can save them from long-term or permanent injury.

Over the last 17 years, Dr. Altman has treated hundreds of children and adults while garnering a well-earned reputation as an expert in Otolaryngology. When he noticed there were no books about the dangers presented to children who place household objects in their nose and ears, he teamed up with friend and illustrator, Richard Jacobson, to fill the void.

“Dirty household objects that kids place in their nose and ears can lead to very serious health risks, such as infections, blocked airways, punctured eardrums and worse,” cautions Dr. Altman. “The financial expense and emotional trauma can also be extremely difficult for parents.”

Dr. Altman has published numerous peer-reviewed articles in prestigious medical journals. However, he knew a book dealing with child safety issues needed to be fun, enjoyable and accessible. Don’t Stick Sticks Up Your Nose! Don’t Stuff Stuff In Your Ears! is his lively and creative solution to a common problem that confronts every parent.

Keep things out of your EARS!”

Or as Dr. Altman likes to simply say, “Buying a book is a lot more fun than an emergency trip to my office.”